“Alexa, ask what3words to navigate to ‘pocket appear lucky’” | what3words
We use cookies, including third party cookies, to improve your experience and for marketing purposes. By continuing to browse we assume you have consented to their use. Learn More
OK
All
Automotive
Ride-hailing
Navigation
Travel
E-commerce
Logistics
Emergency
Government
GIS
Humanitarian
UAVs
Blog 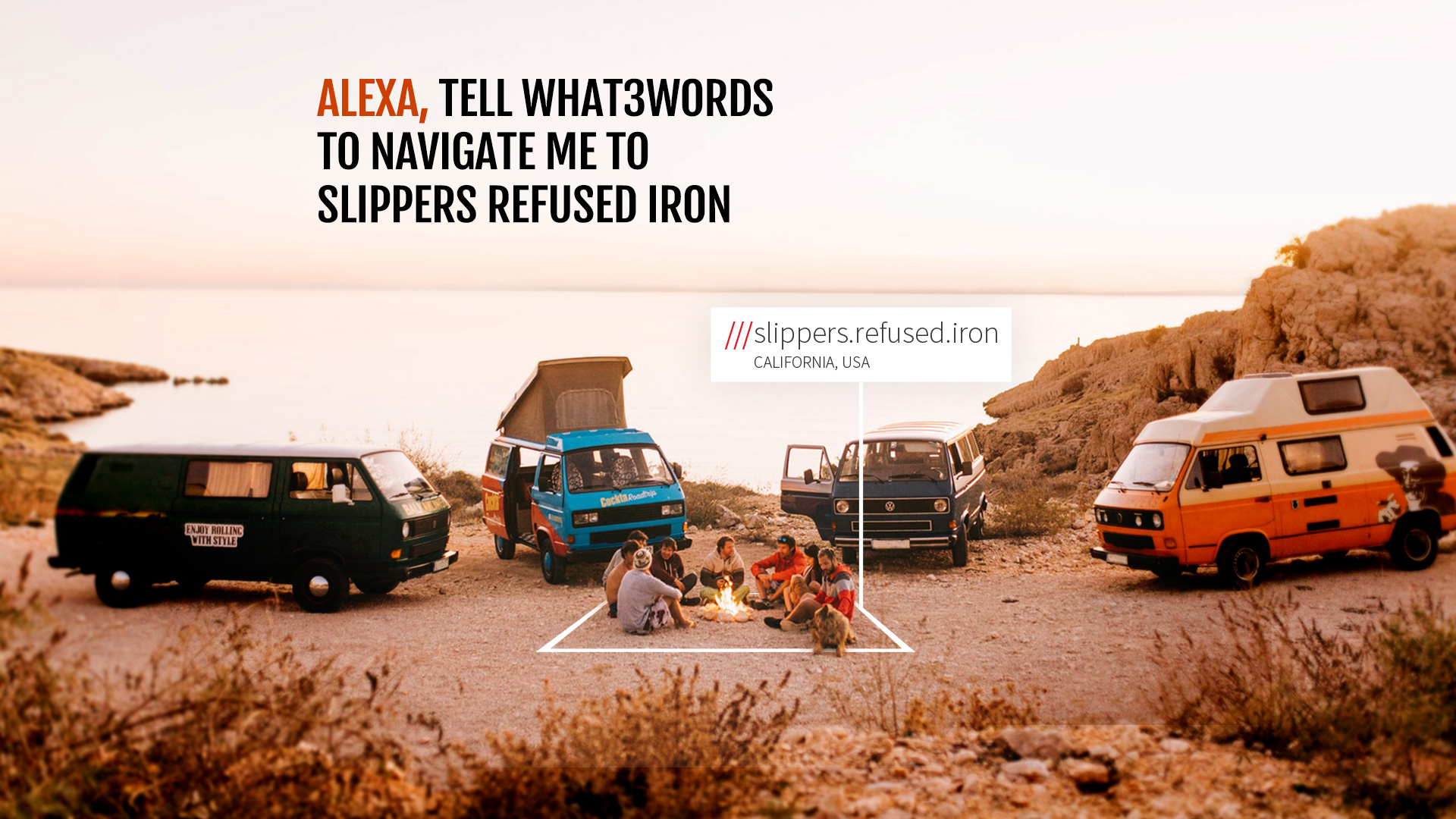 Skill will enable Alexa users to interact with the innovative location technology, including navigating to precise 3m x 3m squares

Today, what3words announces it will introduce the what3words skill for Amazon Alexa. The skill will enable Alexa users to discover where a 3 word address is and ask to be navigated there by any Alexa-enabled device. The announcement enables Alexa devices of all types to recognise an addressing system built for voice, paving the way for new developments for both developers and consumers.

what3words is changing the way that people use and interact with location. They’ve divided the world up into a grid of 3m x 3m (10ft x 10ft) squares, and assigned each a unique identifier made up from 3 dictionary words; a 3 word address. The system is currently available in 36 languages, including all of those supported by Alexa. From the entrance to the Volleyball courts in Central Park, which can be found at ///zips.pops.soccer, to a beautiful view of Cold Mountain, Yosemite, at ///notion.mindset.pulling – everywhere and anywhere has a 3 word address.

Unlike street addresses, what3words is specifically designed for voice input. Street addressing has a voice problem and speaking a street address into a voice interface can be lengthy and frustrating. Saying ‘Take me to 241st Street’ can sound exactly the same as ‘Take me to 2, 41st Street’. And, of course, street addresses don’t cover everywhere.
Street names also aren’t unique – take the 10,000+ ‘Second Street’s in the USA or the 14 Church Roads in London. When it comes to postal and zip codes, mistakes are too easy to make when ‘N’s get mistaken for ‘M’s and ‘A’s for ‘8’s, and ‘15’s for 50’s’.

As each 3 word address is unique and with similar sounding combinations placed very far apart, errors are easy to detect and correct, an essential feature in a screen-less interface. what3words also allows consumers to talk about a specific part of an address – something before that has been impossible.

The what3words skill will enable users to ask questions like, “Alexa, ask what3words to navigate me to filled count soap”, prompting the device to start navigation. The skill will be available on Alexa-enabled vehicles and automotive accessories like Echo Auto, with the goal of enabling drivers to arrive at the correct location, first time, every time.

The what3words skill is also for the curious. Users can ask, “Alexa, ask what3words where is filled count soap?”, or “Alexa, ask what3words how long it will take me to get to index home raft?’ The what3words skill also takes advantage of the Alexa Presentation Language (APL) – meaning it will incorporate imagery and visuals in addition to voice feedback on screen-based devices like the Echo Show. By adding this interaction, users are able to explore what it means to talk about specific location.

The Alexa skill follows what3words projects with automotive companies like Mercedes-Benz and Ford, who have also put the what3words functionality in their vehicles, and travel companies including Lonely Planet and Airbnb who are adding 3 word addresses to listings and points of interest.

“In a voice-first, screenless world getting the right address, first time, every time, is essential.” Chris Sheldrick, Co-founder & CEO what3words, “Whilst speech recognition will get better and better, it won’t solve the underlying issue of addressing systems that are not fit for the task. With the launch of this skill, we are paving the way for a less frustrating and more efficient experience for all.”

With voice input fast becoming consumers favourite way to communicate with their devices, a new, digital-first approach to addressing is needed. Using traditional addresses that were developed hundreds of years ago aren’t compatible with the way consumers are using them now. With its new skill for Alexa, what3words broadens out its offering to improve customer experience, drive efficiencies and prioritise a more convenient and smoother exchange with the voice service.