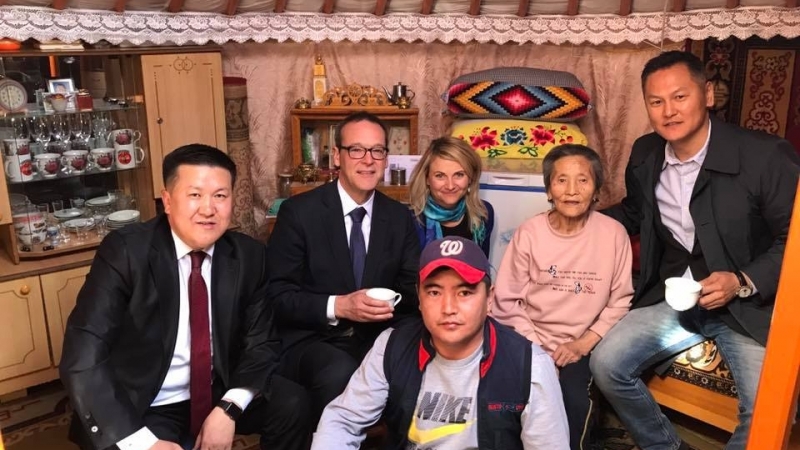 3 words to receive your first ever letter

With its semi-nomadic population and sparsely populated landscape, the people of Mongolia face unique challenges when it comes to delivering and receiving post. In many parts of the country, citizens have to collect mail from Post Office boxes, often kilometres away from their homes. Until earlier this week Ms. Tsesendolgor.Ts had never received a letter in her 80 years!

So you can imagine her surprise when Sir Simon McDonald, UK Permanent Under-Secretary at the Foreign & Commonwealth Office, hand-delivered an invitation for the Queen’s birthday celebrations at the British Embassy in Ulaanbaatar this June. The address of Tsesendolgor’s yurt had been identified using her unique 3 word address.

The invitation was delivered in conjunction with Mongol Post, the national postal delivery service. In 2016, it made the 3 word address system integral to its operations and part of a drive to boost the country’s economic development.

Mongol Post customers can now discover any 3 word address, via the free what3words app, and simply write it on a letter or enter it on the checkout page of a shopping website. Postal workers can then use that unique address to navigate to a precise 3x3m location, at the customer’s front door – whether that’s in the centre of Ulaanbaatar, the informal Ger districts that skirt the capital or a hut on the edge of the Gobi desert.

Two months after receiving her invite, Ms. Tsesendolgor.T travelled to Ulaanbaatar as the guest of honour at the Queen’s birthday party at the British Embassy. She even cut the cake with Batbold, a former Prime Minister of Mongolia, and Catherine Arnold, the British Ambassador.