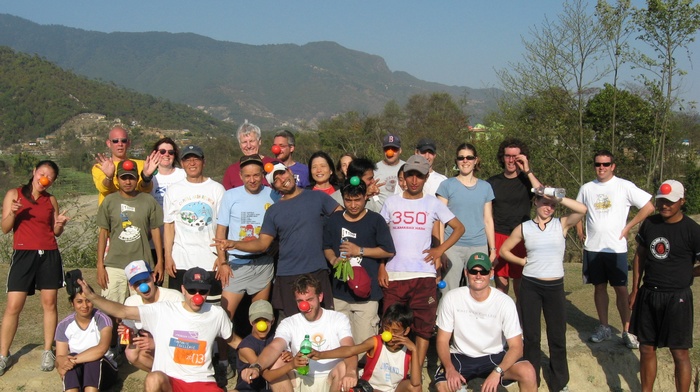 3 words to coordinate runs in the Himalayas

The Himalayan Hash House Harriers (abbreviated to HHHH) are the Nepal chapter of the Hash House Harriers, a worldwide society of non-competitive social running clubs. Neil Horning explains how 3 word addresses are helping them coordinate their runs.

Generally a Hash run is set ahead of time by a “Hare” who lays down a trail of shredded paper, which is then found and followed by the rest of the group, in a different location every week. The Himalayan Hash is known for its relatively low key atmosphere, and the emphasis on running up and down hills.

Members of the HHHH initially came across what3words as part of the Nepal 2015 earthquake response. One hasher discovered 3 word addresses as part of her work as the national head of a major humanitarian INGO. Another was later contacted by what3words via the Digital Humanitarian Network. In the response, what3words was a potential antidote to the coordination hassles associated with frequently duplicate and inconsistently spelled Nepali place names, and in communicating GPS coordinates in off-line or low-connectivity environments.

The HHHH use what3words to post the location of their upcoming runs for largely the same reasons. In addition, embedding the what3words web map on the rustically styled website allows viewers to see the locations using several alternate base maps like Google, Mapbox and OSM, which have varying levels of coverage in Nepal. Putting the 3 word address on the front page allows lost smartphone users to bring up the app and get an arrow pointing to the hash location in one click, without waiting for a map to load. Use of what3words on the Hash also sensitizes key members of the ex-pat community in Nepal to the use of the platform, so it can be more seamlessly integrated into any future crisis responses.

what3words provides a precise and incredibly simple way to talk about location, helping people find the best route to get from A to B, making it easier to get where you need to be.