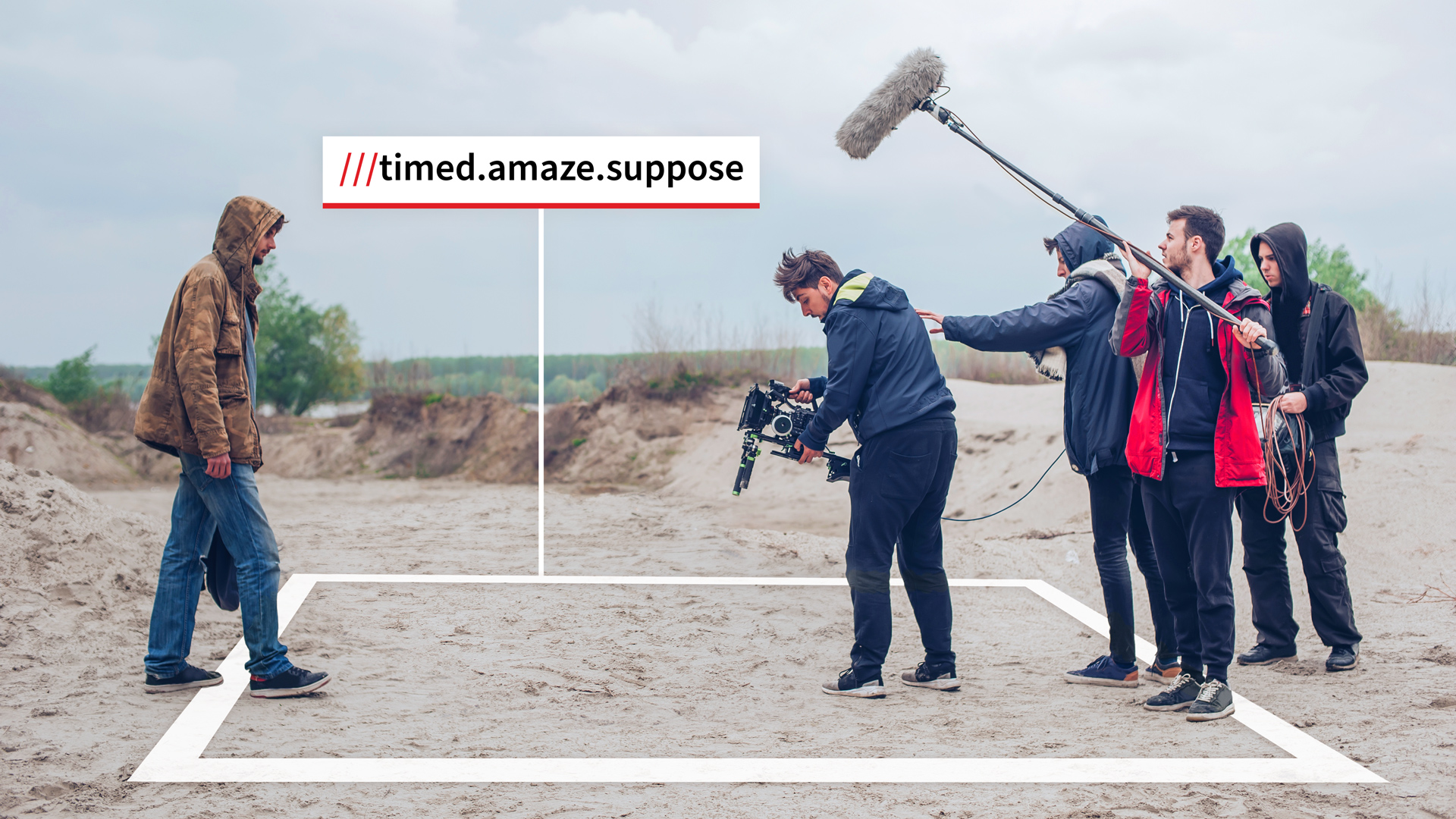 what3words for film and TV production

No matter where a film or TV shoot is taking place, what3words is helping companies and crews to find and share locations, making the production process as smooth as possible.

It’s common for film crews to find themselves in all sorts of weird and wonderful locations — cliff tops, huge industrial estates, forests, remote buildings — that often have no street addresses or landmarks, making them hard to describe to others.

Knowing exactly where you are, and being able to communicate that fact, is important when making a film or a TV show. A lot of people are required to realise a successful production– cast, crew, security, catering, technicians, props, health and safety – which means there are lots of opportunities for people and equipment to get lost. To prevent shoots overrunning and unnecessary stress, many production teams and companies use what3words.

what3words is an easy way to communicate precise locations. It has divided the world into a grid of 3 metre squares and given each square a unique combination of three random words: a what3words address. It’s used by millions of people around the world to find, share and navigate to precise locations that might be hard to describe, or lack a street address.

When Steven Spielberg was filming Ready Player One in Birmingham, the what3words addresses for all of the locations were displayed on the call sheet so they would be easy for everyone to find – from the action vehicle base at ///gent.drill.diary to the crew parking at ///organs.boxer.shop. Similarly, production crews on ‘1917’ and ‘Two Weeks to Live’ found it useful to put what3words addresses on call sheets too.

Millk Media is based in Manchester and works with broadcasters and global brands to produce memorable film content. Andy, their Client Services Director said

‘As a video production company, we often work in areas where traditional addresses and postcodes don’t really make any sense. Using what3words means we can direct crew, cast or clients to a direct spot and we know where to meet or collect them from.’
-Andy, Client Services Director at Millk Media

The Film Fixer is a location management company that works with local authorities and other stakeholders to make sure shoots are efficient and everyone’s needs are met. They have displayed the what3words addresses for previous shooting locations, helping make it clear where everyone and everything needs to be.

Taxi and vehicle hire companies often need to drop people and equipment off on set. To offer a reliable and efficient service, Addison Lee now uses what3words to ensure that everything and everyone arrives exactly where they are needed.

The Movie Lot provides on-set security for productions such as the ‘Doctor Who’ and ‘Fantastic Beasts’ franchise. It uses what3words to coordinate production and security crews, as well as equipment while on location. The Director at The Movie Lot, Mark Davies, explains,

‘We are proud to be partnered with what3words, it has been a huge addition for us to navigate guards to their exact position on locations. We’ve used it to coordinate guards on locations from hospital sites to outdoor film sets.’
– Mark Davies, Managing Director and Operations at The Movie Lot

Helios Pro is a smart tool that allows users to forecast the position of the sun, moon and stars to help visualise what a shot will look like at any time of day. With the what3words integration, a scout can share a specific location’s what3words address with a director who can put it into Helios Pro to plan the shot before even visiting the location.

Manage your locations with what3words

Shared lists is a feature within the free what3words app. All the locations the crew will need, whether they are places for filming, storing equipment, toilets or food stations, can be saved in one place. Lists can be shared with anyone that needs them and users will be prompted to ‘follow’ the list to be notified of any changes, so the crew always has the most up-to-date locations.

On the other side of the camera

what3words has also been spotted on screen, being incorporated into scripts and storylines. In an episode of NCIS LA, three mysterious words hidden in a book by kidnapped Hettie led her colleagues to where she was being held, and an episode of BBC’s Casualty saw popular character Fenisha using what3words to get help when she went into early labour in a remote woodland.

If you work in the TV and film industry and want to use what3words, get in touch at laura.mph@what3words.com