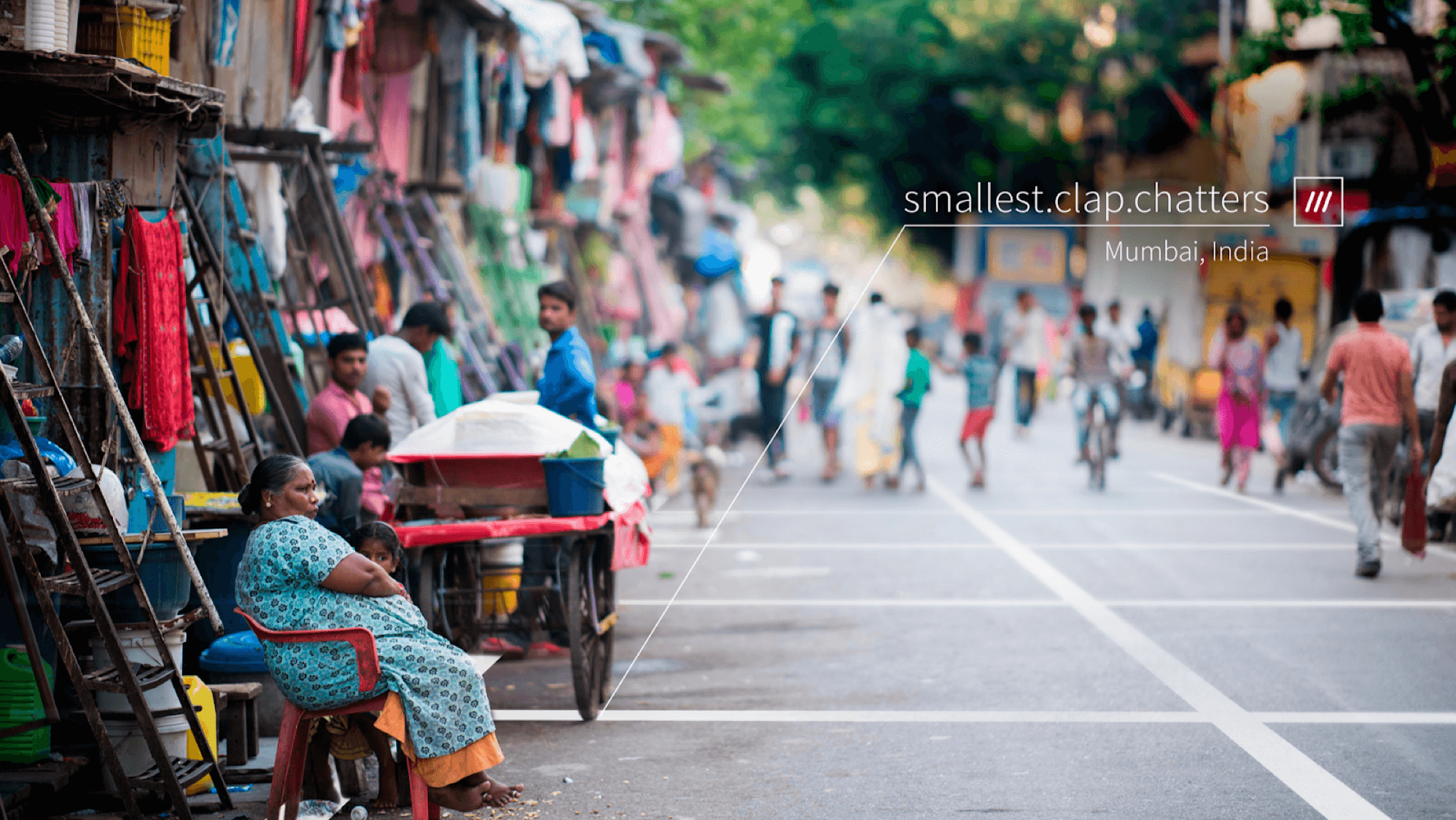 By Anne-Claire Blet, Director of Strategic Partnerships at what3words

When we arrived at the Malabar Hill Post Office in Mumbai, it was difficult to walk in. Hundreds of parcels lined the walls from floor to ceiling, taking over the space between desks too. Postal workers looked slightly apologetic as we squeezed in between the stacks, trying not to knock anything over.

The e-commerce boom that has taken the world by storm has without a doubt reached India. Customer expectations are high, and as more and more citizens seek door-to-door deliveries, business has never been better for India Post.

But local post offices are struggling to keep up with customer demand, as packages are arriving faster than they can be delivered. That’s because there is no standard for addresses: formats vary across regions, lots of streets have no names and buildings are often unnumbered. When people and places are hard to locate, postal workers spend more time on deliveries while packages pile up back at the office.

The Indian Department of Post identified poor addressing as a major barrier to the fast growth the country has been experiencing and invited what3words to test its operations and demonstrate how 3 word addresses could improve its quality of service.

Over the course of three weeks, we conducted a series of tests with India Post staff on addressing, sorting, and delivery, comparing 3 word addresses to street addresses and other methods of defining location. To do that, we visited six post offices across the states of Maharashtra, Kerala and Odisha. The eight of us covered 2,500 km of delivery routes in rural and urban areas, visited some of the world’s largest manual sorting centres and put our OCR solution to the test against postal workers with more than 20 years of experience.

What is a 3 word address?

what3words is the simplest way to talk about location with precision. It has divided the world into a grid of 3m x 3m squares and given each a 3 word address. For example, ///importing.mailings.openly is the 3 word address for India Post’s headquarters entrance in Delhi.

The system is available in 26 languages, with 6 Indian languages being released soon: Hindi, Bengali, Tamil, Marathi, Telugu and Kannada. This means that 750 million people in India will be able to use 3 word addresses in their mother tongue.

Putting what3words to the test: traditional addresses vs what3words

After getting to know the postal staff and observing and understanding their operations, we conducted a series of tests to compare the efficiency of traditional addresses with 3 word addresses. To ensure fair and easily comparable results and to draw sound conclusions, we used similar methodologies for each test. 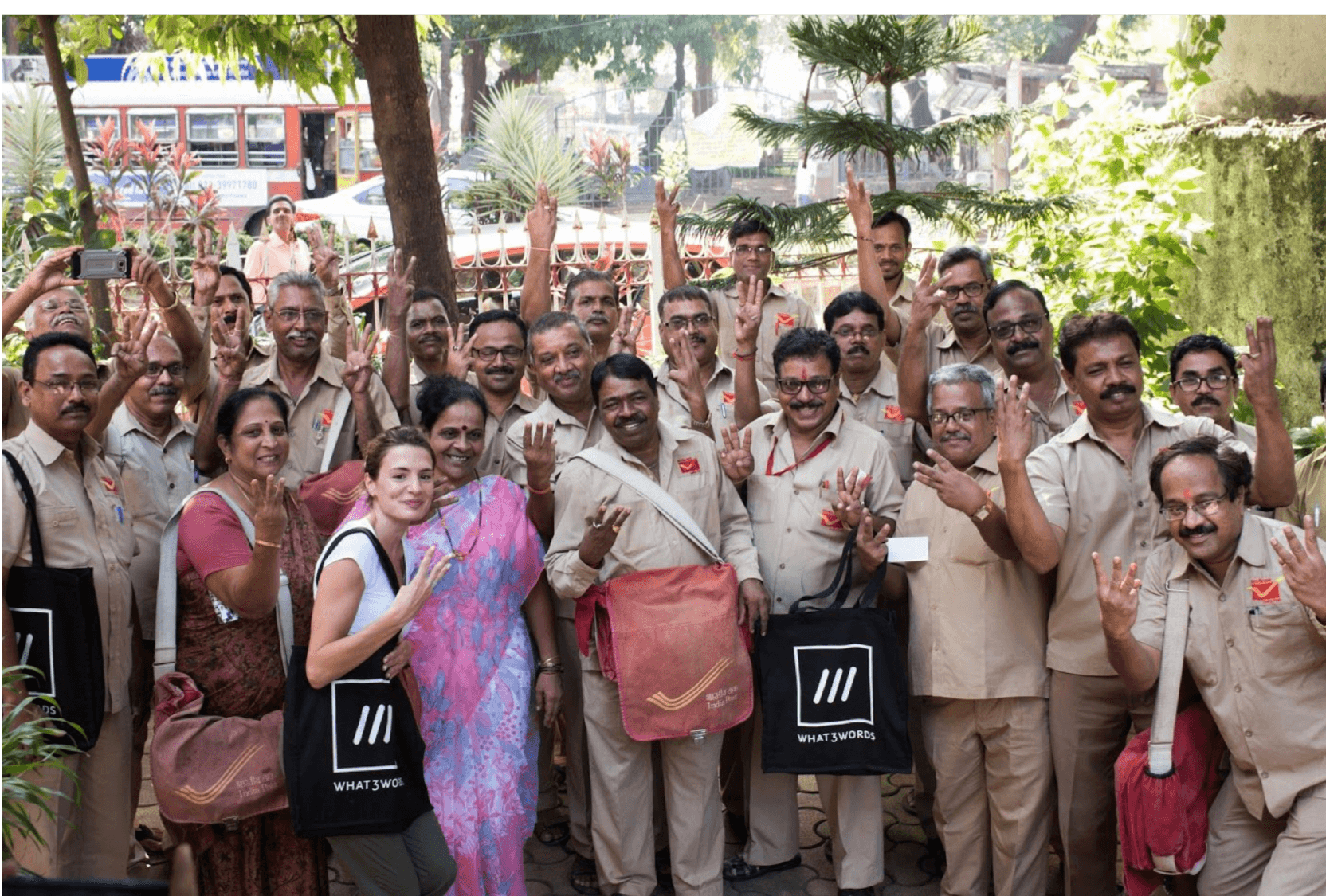 Discovery of 3 word addresses and memorability

We then compared the memorability of 3 word addresses against alphanumeric systems: 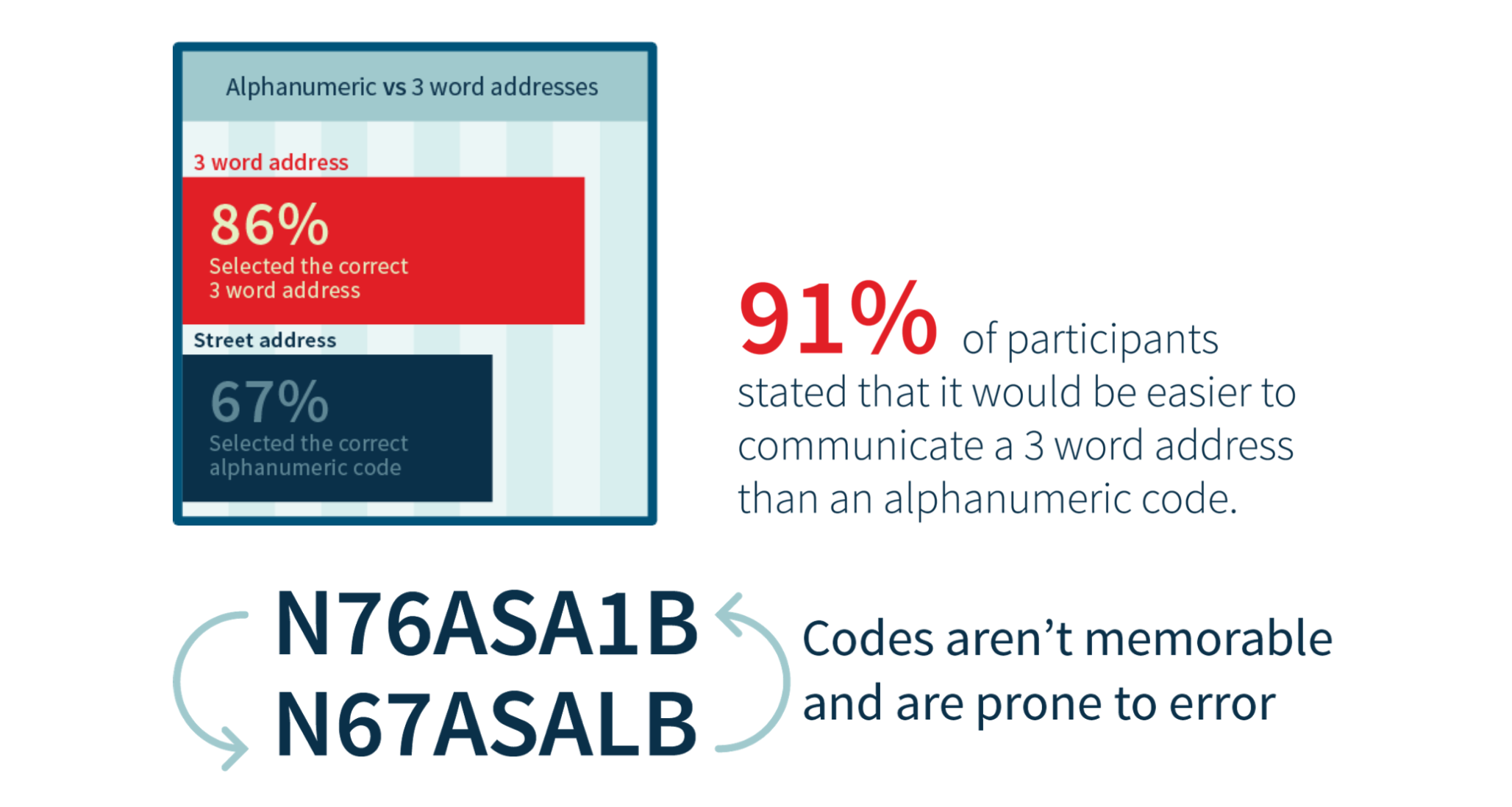 We also examined manual provision of 3 word addresses, whereby the relevant authorities would provide 3 word addresses by visiting Indian homes and businesses. Because they have been pre-assigned for the entire world and only need to be discovered, it would take less than five days for postal workers to provide everyone in India with their own 3 word address, making what3words quick and cost-effective to implement compared to other systems.

We then tested the efficiency and accuracy of manual sorting in the six post offices, and compared this to the sorting of 3 word addressed items using our Optical Character Recognition (OCR) scanning app.

For regular mail, what3words’ solution was 9.6% faster than the current traditional sorting methods. Items sent through India Post’s premium SpeedPost service, which are currently sorted multiple times, only needed to be sorted once – making the process 13.4% faster.

We accompanied postal workers on their delivery runs to record timings and distance covered during regular deliveries, then repeated the deliveries with a fresh team using 3 word addresses and a custom what3words route optimisation algorithm.

what3words deliveries were 7.3% more time-efficient, with improved distance efficiency of 10.8%. In addition, when we compared deliveries made by a new postal worker with no knowledge of the area, what3words helped improve efficiency by 31% for time and 13% for distance. 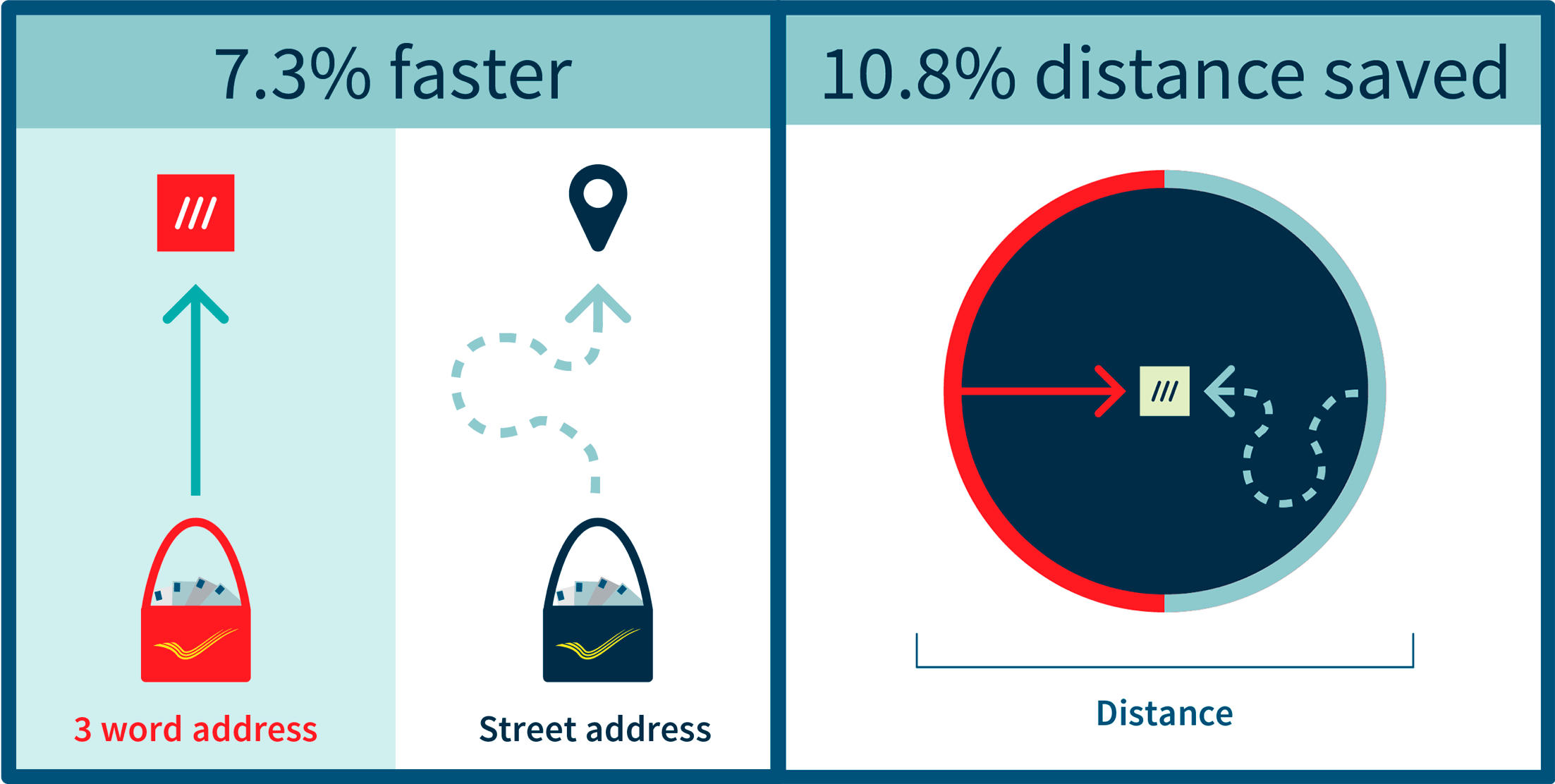 The potential of 3 word addresses to significantly improve efficiency and accuracy across postal operations is clear.

Thanks to its partnership with what3words, Mongol Post’s sorting operations accuracy is 15% higher, nearly 3 minutes are saved on each delivery and the number of successful first-time deliveries has increased by 18%. These improvements have kick-started an entire e-commerce ecosystem in Mongolia.

What does this mean for postal services?

By adopting what3words, postal services can reach more people, provide a higher quality of service, generate revenue and unlock cross-border e-commerce opportunities. They can also take a key role in the growth and digitalisation of their country because the system can help support the creation of key tools for social and economic development like national databases of addresses, land administration geoportals and emergency service response services.

We left India having become experts in stamp franking and beat sequencing, empathised with postal workers’ frustration with poor addresses and with a newfound respect for their determination to bring mail to its rightful owners no matter how obscure the destination. The pilot wouldn’t have been possible without their and the Department of Post’s willingness for us to observe and analyse their processes and shadow them over twenty-one insightful and eventful days.”